For a better view on The Barcadere Marina, Update Your Browser.

The term “barcadere” has been used by Caymanians for centuries, but you will not find it in any English dictionary.  It is derived from the French “débarcadère” meaning a “landing place” for boats and is synonymous with the Spanish words “embarcadero” or “embarcado” meaning “a place to from which to embark or disembark on a nautical voyage”.  Barcaderes are richly steeped in the Cayman Islands’ seafaring culture and history.

Living on these tiny islands in the Caribbean, completely surrounded by some of the deepest water in the world, the sea was an intrinsic part of life for early Caymanians.  Indeed, for some two hundred years of our islands history just about every single male was making his living from the sea.  Whether it was sailing on the turtle schooners which ranged far and wide across the Western Caribbean to return with turtles on deck, or simply heading out to the nearby banks to fish in a tiny catboat, they would have begun their voyage at one barcadere or another and would have returned there to clean, or butcher, their catch of fish, or turtle.

Caymanians eventually became world renowned mariners, sought after by the largest shipping companies as captains, navigators and crew for their vessels. They were also recognized as master shipbuilders, another trade born of an obvious necessity.  Over the years there have been literally hundreds of schooners, catboats, skiffs and, in later years, even motor vessels built right here on our shores, some of which, such as the "Western Union" are still in use today.  These vessels were usually constructed at a "barcadere", or “landing place”, in order to facilitate an easy launch once completed.

Eventually barcaderes, or landing places, were constructed all around the coast as the islands were populated, some public, but most private, to facilitate the launching and retrieval of vessels with relative ease on a regular basis.  However, the term eventually fell into disuse, as did most of the sites over the years, but at one time or another every single district would have featured several, with some becoming known by other names, such as Smith’s Cove, for example.

The George Town Barcadere holds the distinction of being the oldest documented barcadere in Grand Cayman.  Quietly nestled on the South Western shore of the North Sound, on George Town’s Eastern coastline, it has been located at the tip of North Sound Road since the early 1700s, as evidenced by its presence on Grand Cayman’s earliest maps.  It has remained in continuous use since at least as as early as 1735, when it is noted and illustrated as a part of the original land grant in The Cayman Islands from the British Crown to John Middleton, Daniel Campbell and Mary Campbell.

This area eventually became known for its sea turtle pens, or “turtle crawls”, where the turtle schooners would deliver their catch to be corralled before being butchered for local consumption, or for processing in the nearby turtle soup-canning factory for sale both here and abroad.  It was, without a doubt, the most vital barcadere to Grand Cayman’s social and economic livelihood, being second only in importance to the official government pier at Hog Sty Bay, on the Western coast of George Town.

In more modern times, the advent of the airplane meant that Cayman was now only a relatively short flight from its neighboring islands and the USA, but without a runway there was nowhere to land.  Nowhere, that is, unless the aircraft in question was amphibious.  The protected area of water in the North Sound was smooth enough for seaplanes to take off and land, and in the 1940s George Town Barcadere became Grand Cayman’s first airport, complete with a customs and immigration building and a thatched hut arrival and departure waiting shelter.

Converted U.S. Navy Consolidated PBY “Catalina” seaplanes would land on the water and tiny skiffs would retrieve the passengers from the seaplane’s anchorage, bringing them to the dock while small crowds gathered in the shelter of the thatch hut to witness their arrival.  However, after Owen Roberts International Airport opened nearby in 1954, converted US Navy seaplanes gave way to commercial land based aircraft.

Sadly, the George Town Barcadere became a literal backwater and for too long it remained forgotten, until now…

*Thank you to The Cayman Islands National Archive Photographic Collections for the use of the images on this section of the website and to Cayman Free Press for use of the Catalina landed on the North Sound image, for which they hold copyright. 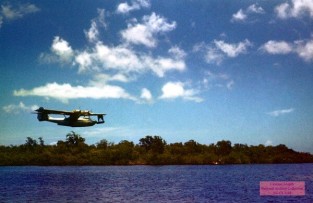 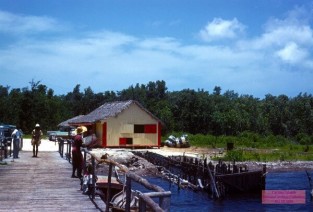